Eagles Official Sponsor
The Eagles travelled to Grosse Pointe Saturday to compete in the Division 4 Regional Baseball Tournament.
In the first game, we played Cardinal Mooney from Marine City.  Phillip Morby took the hill for the Eagles and pitched an 8-inning complete game.  Things were rocky from the start of the game, we managed to get a base runner in the top of the 1st inning, when Phillip Morby singled to left, but we could not bring him around.  In the bottom of the 1st, Mooney’s 1st 3 hitters reached base and scored as 7 batters hit.  After the 1st it was 3-0 Mooney and not looking good for the Eagles.  The score remained 3-0 until the Eagles batted in the 6th, Norbie Fernandez led off the inning with a single and moved over to 3rd on a single by Gavin Goerke, after Goerke stole 2nd, and moved to 3rd on a wild pitch that scored Fernandez, Jacob Weertz flared a perfectly placed infield hit just over the pitcher’s head scoring Goerke. Mooney 3, PCA 2.  In the 7th, Nathan Etnyre singled and moved to 3rd on 2 wild pitches, Gavin Goerke smoked a hard grounder off the pitcher’s left leg, scoring Etnyre and tying the game.  In the bottom of the 7th, Mooney made some noise, but a well timed double play ended the threat.  In the top of the 8th, Jacob Weertz stuck put leading off the inning, but the ball went to the backstop and he reached 1st.  Connor Smith bunted Weertz over to 2nd, and Weertz was lifted for pitch runner Gabe Emilio.  Ricky Limon then laced a line drive into left center and moved Emilio to 3rd and Evan Wright brought him home on a deep sacrifice fly to center.  PCA 4, Mooney 3.  In the bottom of the 8th, Mooney had 2,3 & 4 coming up, but they flied out to center, grounded out to 1st and the game ended on a line drive that was heading for the right center field gap, but Norbie Fernandez caught some air and picked it out of the sky for the final out.  Phillip Morby was amazing on the mound all day.  He did not have a curve ball today, but was able to move his fast ball around to keep Mooney off balance and did a great job pitching to contact.
Then we had to wait to see who we would face in the Regional Final, Everest Collegiate from Clarkston defeated Royal Oak Shrine Catholic 3-1.
In the final, we flipped the script from the 1st game and scored early and held on.  In the bottom of the 1st, Norbie Fernandez reached on an error with 2 outs, followed by a Gavin Goerke reaching on another error.  Dillon Morby walked and Jacob Weertz repeated his heroics from the first game with a line drive to left scoring Fernandez.  In the bottom of the 2nd, Nathan Etnyre reached on a fielder’s choice and stole 2nd, Phillip Morby followed with a double to left scoring Etnyre.  Norbie Fernandez again forced an error scoring Morby to give PCA a 3-0 lead after 2.  Everest got one back in the top of the 3rd and another in the top of the 5th to make the score 3-2.  Ricky Limon Started for the Eagles and gave way to Nathan Etnyre in the 5th. In the top of the 7th, Everest got a 1-out runner on first, but was erased on the next pitch with a 4-6-3 double play, the 3rd double play of the day for the Eagles.
Now we move on to the Quarterfinals vs Unionville-Sebewaing Tuesday at Saginaw Valley State University at Noon. 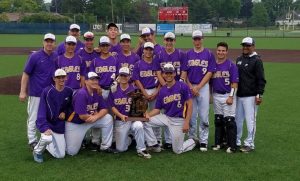