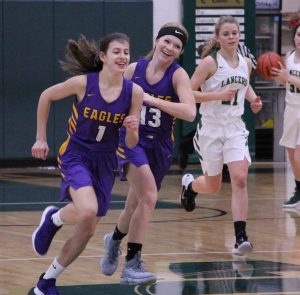 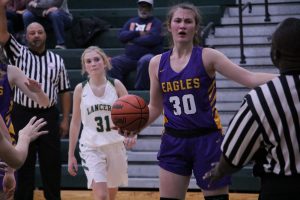 AUBURN HILLS, MI (December 6, 2018) Plymouth Christian earned their first win of the season with a tough 44-39 win at Oakland Christian.

The Eagles saw their 14-point half-time lead get whittled down to two by the Lancers who were led by Danielle Hopkins, who had a game high, 20 points. But, PCA got some timely stops and made a couple of clinching free throws to seal the win.

PCA had a 10-9 lead after the first quarter. Ella Godin had four points in the stanza to pace the Eagles. Godin finished with a double-double, 11 points and 12 rebounds.

The Purple and Gold came out scorching the nets in the second quarter, outscoring Oakland Christian, 16-3 as they built their 26-12 lead. Sarah Fernandes (2), Harlee Collins and Anna Fernandez all recorded triples in the 2nd.

Oakland Christian got back into the game with some solid half-court trapping defense, Hopkins’ threes and some foul calls that smacked of “home-cooking”.

The Lancers doubled PCA’s guards quickly and forced several turnovers and rushed shots. Oakland went on a shooting spree that turned the blow-out into a potential nail-biter. After three quarters, Oakland was down four, 36-32 and right back into the game.

But PCA’s defense stood tall. Ariela Boboc had nine blocks to go along with nine rebounds. Rachel Costello chipped in with a block and a rebound. Oakland never tied or led in the game in the second half.

Coach Rod Windle was impressed at how the team finished, “We showed poise on the road – that’s big. It’s not easy – with the opposing crowd and other things that are out of our control. But we stayed mentally tough and we made some big shots. And the girls really worked hard.”

Freshman Anna Fernandez continued to get comfortable with the varsity game as she had eight points and a critical three-pointer.

Leadership from the Captains was evident tonight as well. Seniors Sarah Fernandes had nine points and Harlee Collins chipped in with six.

PCA gets little time to enjoy this victory – they play Friday at Livonia Franklin. Game time is 7pm.