FOWLERVILLE, MI (August 24, 2019) – The 12 PCA tennis players who made the trip to Fowlerville and Howell got a sample of the difficulties that a varsity athlete must endure.

They had to battle their own nerves, the weather, the pressure to perform for each other and topflight opponents in the annu 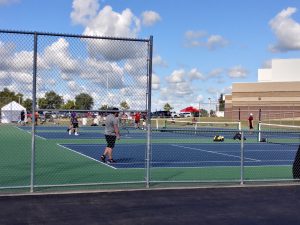 The Eagles struggled at times but showed definite improvement as the day passed.

Tim Perumalla, at #4 singles, battled through fatigue but eventually lost a close third match to his Eaton Rapids opponent.

Rachel Costello, seeing her first action of the season at #2 singles, battled throug 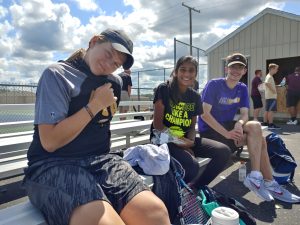 hout and lost a tough three-set match to her final opponent.

Gloria Ravuri and Chris Bilko lost two tough matches at #1 doubles. They defended like brick walls and used “just get the ball back” as their rallying cry. Their second-round match against Eaton Rapids was a demonstration of their grit. In the end, however, they fell in three sets, losing 11-9 in the third set tiebreaker.

Other Eagle competitors were:

The Purple and Gold will play on Tuesday, August 27 at 4:30 against Monroe St. Mary Catholic Central. That match will be played at the PARC in downtown Plymouth.