DEARBORN, MI (September 30, 2019) – The Eagles tennis team saw their five-match dual winning streak come to an end as the Pioneers downed the Purple and Gold, 6-2.

Garnering victories for PCA were #2 Singles player Rachel Costello who won in straight sets, 6-2, 6-2.  “I was really happy with how I played today. I played so bad last Thursday, and it was nice to bounce back, play well and finish the match strong. 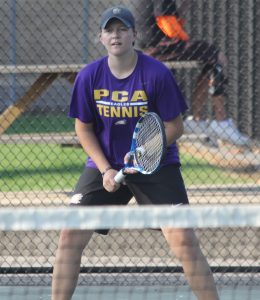 It was nice to get a W against Dearborn – I’ve lost to them three straight times, so as a Senior, it felt pretty good”, Costello said.

Daniel Krivacs at #3 Singles, also won in straight sets, 6-1, 6-1. Krivacs may have played his best match of the year in the win over Junior Hassan Beydoun. He hustled and fought for every point and the forehand, his favorite shot was the weapon that made the difference.

Aidan Hing, filling in for Justin Parks at #1 Singles fought valiantly, but lost in straight sets.

Caleb Cameron at #4 Singles battled against his sophomore opponent, Nick Harrison b 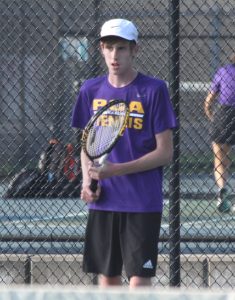 In doubles play, Gloria Ravuri and Chris Bilko played a marathon two-set match, bowing out 7-6, 7-5.  Their points were long and both teams felt comfortable in the lengthy rallies. Both Head Coaches quipped that they may need to turn on the lights as the sun began to set.

in straight sets as well.

PCA doesn’t have time to rest however, as they play on Tuesday October 1 against Southfield A & T. The match will be played at the PARC with a start time of 4:30 pm.

On Thursday, PCA will hold their annual Purple / Gold scrimmages as well as their Senior Night. The matches will begin at 4pm with Senior Night festivities starting at 5:30. 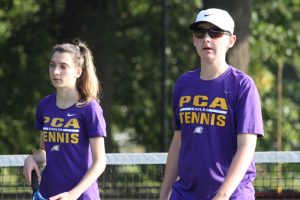 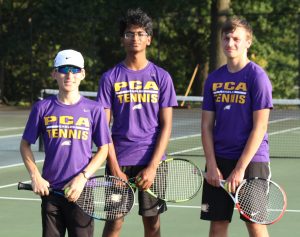