CANTON, MI (November 29, 2019) – There were plenty of things to be thankful for on Friday as the PCA Eagles Girls basketball team won both of their scrimmage games at the P-CEP scrimmages. 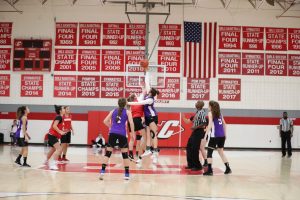 of the house and watch some basketball and participate in fellowship and the coaches were thankful to have the opportunity to see just how much talent is on this Eagle roster.

The scrimmages this day after Thanksgiving gave the girls an opportunity to see live competition in preparation to their home opener against Grosse Pointe Liggett on Tuesday.

At least a dozen teams from Southeast Michigan converged on the Plymouth/Canton/Salem campus to play in two 40-minute running time games. 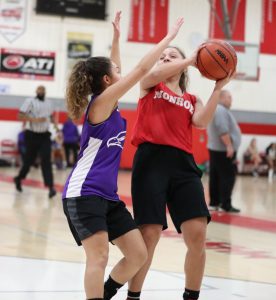 The Eagles got strong guard play from Anna Fernandez, Morganne Houk and Isabel Mossel and won a hard-fought battle with Monroe, 32-21. Coach Rod Windle used several player combinations to see who had the right chemistry. PCA played solid team defense and walked off with the win. 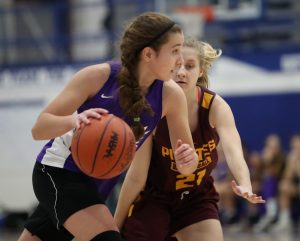 In game two, at Salem’s gym, the Eagles faced Riverview. Every play in the first few minutes of the game went the Eagles way as the Purple and Gold raced to a 16-2 lead. The Pirates called a needed time-out and settled in, slicing into the lead. The Eagles clung to the lead – Ariela Boboc, Anna Fernandez and Morganne Houk got timely baskets and led at the half.

Riverview employed a press coming out of the break and at one point held a slim lead. But the press break led to easy hoops by Ella Godin, Emma Clark and Boboc and the Eagles earned a victory, 49-43.

The athletic Eagles looked quick and efficient on offense and hustled back to play solid defense in both games. 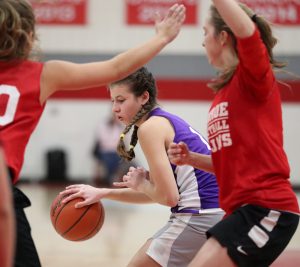 The games will count starting on 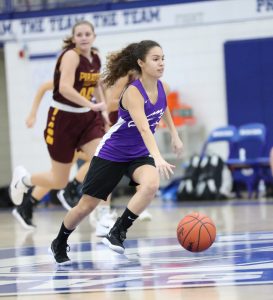 Tuesday when Grosse Pointe Liggett comes to town. Tip is set for 7pm in the Butler Gym.