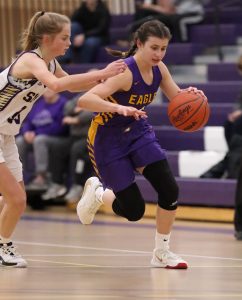 a defensive struggle throughout as both teams used defensive pressure to disrupt the offenses. St. Catherine’s pressure forced the Eagles into 24 second half turnovers, which proved to be the Eagles’ undoing.

The Stars led 10-9 after one as the Eagles missed four free throws.

PCA fought back in the second quarter, outscoring their hosts 10-3 as they built a 19-13 halftime lead.

The Eagles were led by Anna Fernandez with 7 and Morganne Houk with 4. Isabel Mossel and Ariela Boboc had 3 a piece.

The third quarter saw PCA build on their lead. Hoops by Boboc, Fernandez and Mossel gave the Eagles a 30-20 lead af 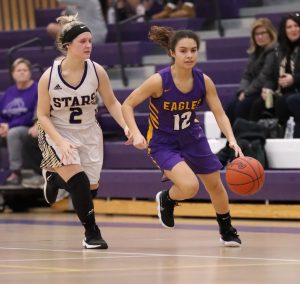 The Stars increased their physical play and forced PCA into making rushed decisions which led to errant passes and fumbled possessions. 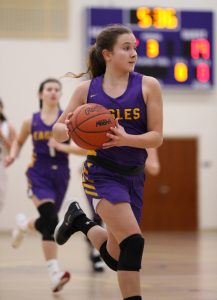 dle lamented, “This one was tough. We got out of our rhythm and seemed to be rushed. We got better at the free throw line, but just too many turnovers.”

St. Catherine was led by Hailey Baumann with 10 pts, Rachel Luomala with 9, Lizzy Turek with 7 and Maeve Burke with 6.

The Eagles are back in action on Thursday when they hit the road again, this time in Westland when they play Lutheran Westland. Game time is 5:30 (JV will play immediately following.)