PCA used a suffocating defense that ignited a first quarter offensive outburst. With the fans cheering on every bucket, the Eagles took an 18-4 lead after the first. 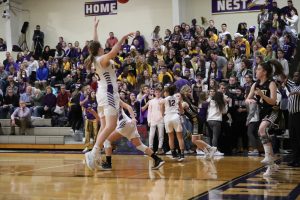 ter featured more firepower as the Purple and Gold netted 19 to give them a 37-9 halftime lead.

Coach Rod Windle had a Midas touch on his substitutions in the second. Immediately after inserting Grace Fernandes and Emma Clark into the lineup, they made their first field goal attempt – Fernandes’ was from distance for a long 3.

Pacing the Eagles for the first 16 minutes was A 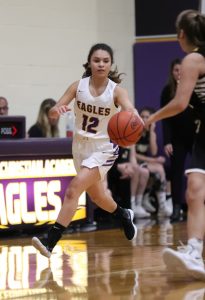 nna Fernandez with 17, Morganne Houk with 5 and Isabel Mossel with 4.

The Eagles continued their run in the third quarter by hitting their three-point shots and playing stifling defense. PCA outscored Everest 16-5 in the third to take a 53-14 lead into the final quarter.

With the Homecoming crowd still energized, the Eagles finished out the contest with style. The defe 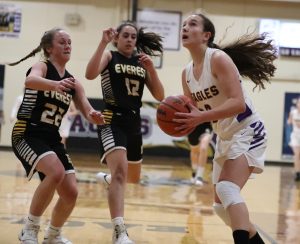 nsive lockdown continued with Everest only scoring 3 points in the fourth.

The raucous crowd was cheering as the Lady Eagles closed out the 58-17 win. 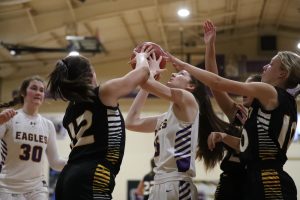 “This was a tough night to play (on Homecoming), but the girls did an awesome job”, said Coach Rod Windle. “They hustled, they defended – another solid effort.”

The Eagles will be in action on Monday, February 10 when they play Whitmore Lake at Little Caesar’s Arena in Downtown Detroit. Start time is 12:45.