DETROIT, MI (February 10, 2020) – The Lady Eagles, usually a fast-starting team, struggled to find their shooting eye and seemed a bit overwhelmed at the cavernous Little Caesar’s Arena early on against the Trojans of Whitmore Lake. WL raced out to an 11-0 lead in the first quarter of the MIAC cross over played in downtown Detroit. 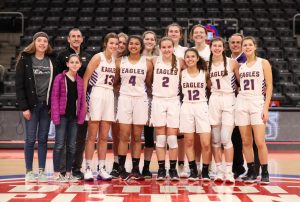 day. Almost mercifully, Morganne Houk hit a three-pointer to prove to the rest of the team there was NOT a lid on the basket.

The Eagles clawed back in the first to cut the Whitmore Lake lead to 15-7 after one. Whitmore Lake seemed to come up with every loose ball, and offensive rebound, but PCA was starting to feel a bit more comfortable.

The PCA guards picked up the pressure defensively and started to make shots. Anna Fernandez, Morganne Houk and Isabel Mossel took the ball to the basket and got some threes to drop.

In the second quarter, the Purple and Gold cut into the Trojan lead and found themselves down at halftime by only one possession, 27-25. 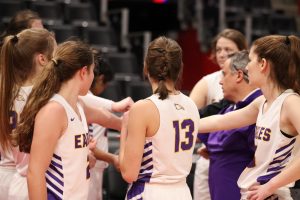 Fernandez and Houk paced the Eagles through 16 minutes with 8 points each. Isabel Mossel had 5 and Ella Godin and Ariela Boboc had 2 a piece, to give the Eagles an inside presence.

Whitmore Lake’s Kristina Peach led all scorers with 15 in the first half. She was a dominating figure on the court, driving to the basket and creating havoc on the defensive end.

PCA picked up the defensive pressure in the second half. They defended Peach more aggressively and caused turnovers in the backcourt. Whitmore Lake still held a rebounding advantage, especially on the defensive end, but Houk and Fernandez saw their shots dropping more frequently. 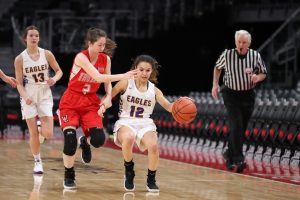 s vintage Eagles. PCA forced turnovers in the backcourt and ran at every opportunity. Houk, Fernandez and Mossel led the fast break and each had uncontested lay-ups.

Their defense limited Peach to 3 points in the second half by collapsing on her as she went to the basket. The added pressure forced her to take several hurried shots.

On the offensive end, Godin and Boboc went to the basket with authority and drew fouls. At the line, PCA made their foul shots to exte 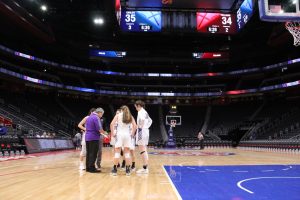 When the horn sounded, PCA had fought back to earn the tough, 50-38 win.

Leading the Trojans were Kristina Peach with 18, Adriana Carter with 8 and Brooke Craven with 6.

PCA’s next game will take place on Valentine’s Day, Friday February 14 as part of a “Biggie Friday” with arch-rival, Inter-City Baptist. The girl’s game will tip at 7pm.