PLYMOUTH, MI (August 26, 2020) – After the 2019 tennis season, Head Coach Brett Manning had some concerns going into the 2020 campaign. The Eagles lost six players to graduation and two elected not to play, but in Mark 10:27, Jesus says, “Everything is possible with God”. Coach Manning knows that God will deliver – and He did. “W 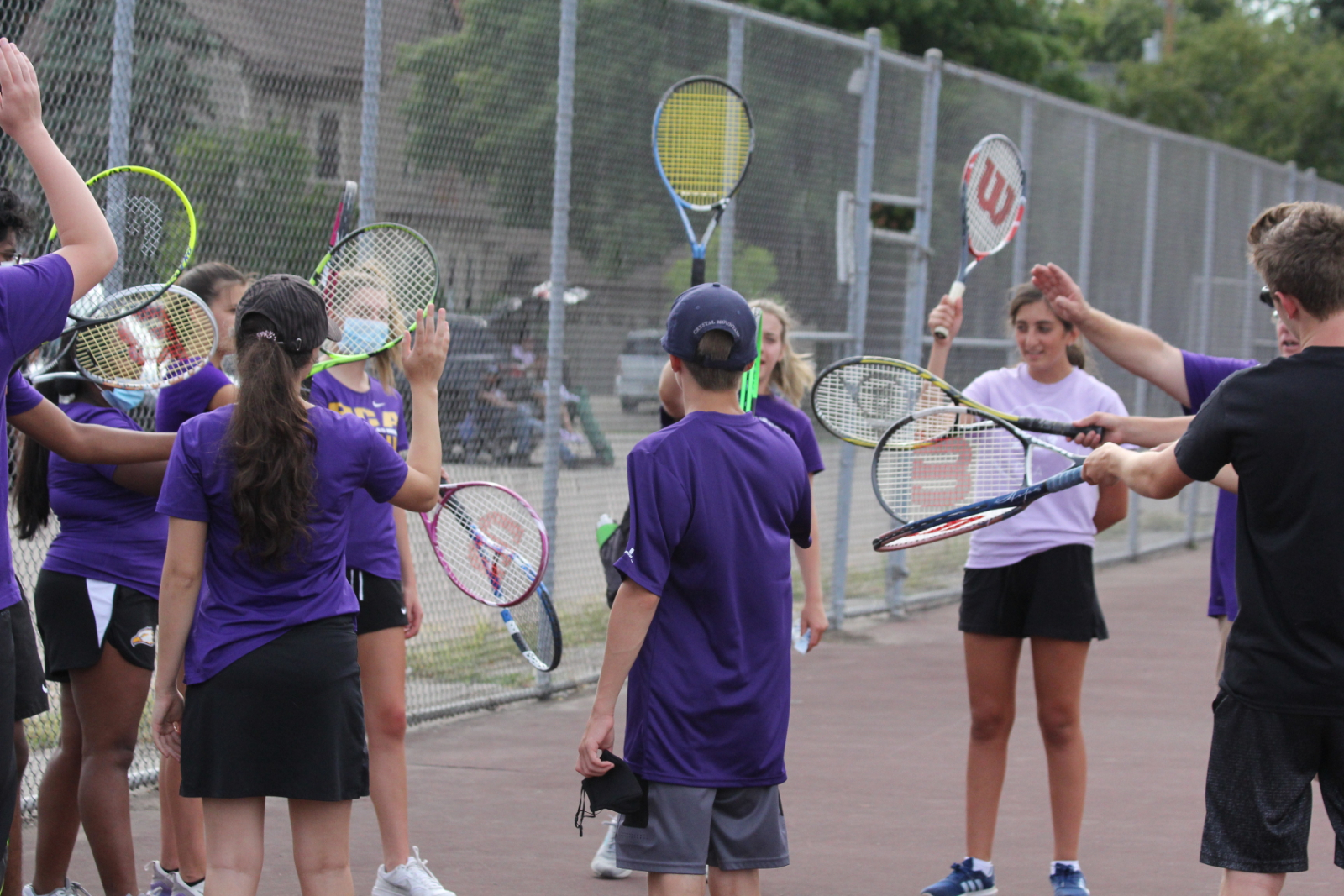 e are so blessed as a team”, Manning says. “God brought people to us. We lost eight players from last year, but we have 15 this year! It truly is a blessing.”

Leading the way for the Eagles will be newly appointed captains, Senior Francesca Barker and Sophomore Isaac Demko.

Demko was pleasantly surprised when he was tabbed for the job. “I am so happy”, he said. “I tried really hard to support people (for the first two weeks of practice), I helped with some instruction and picked up a lot of tennis balls”.  Isaac was also leading the team in the pre-practice warm up drills.

Barker was thrilled as well. “I’m very excited. I’m looking forward to a great season and really focused on providing good leadership and be an encouragement to everyone.”

The singles spots will be led by Alessandra Barker, Francesca’s sister, who comes to PCA from Ann Arbor Gabriel Richard. Her steadiness from the baseline will provide a tough match-up for her opponents. Junior, Tim Perumalla returns to the squad for his third year and will provide veteran stability to go along with his powerful game.

s, already 1-0 on the season, looks to be a solid #3 singles player. The first-year netter showed some moxie yesterday when he rallied in the third set to down his Southfield A and T opponent. Senior, Francesca Barker, who was a solid doubles player last year will move up and round out the singles slots.

Junior Stosh Zasadny and Sophomore Vinnie Lewan look to hold on to the #2 doubles spot, but Sophomores Isaac Demko and newcomer Eshton Krieger will be looking to move 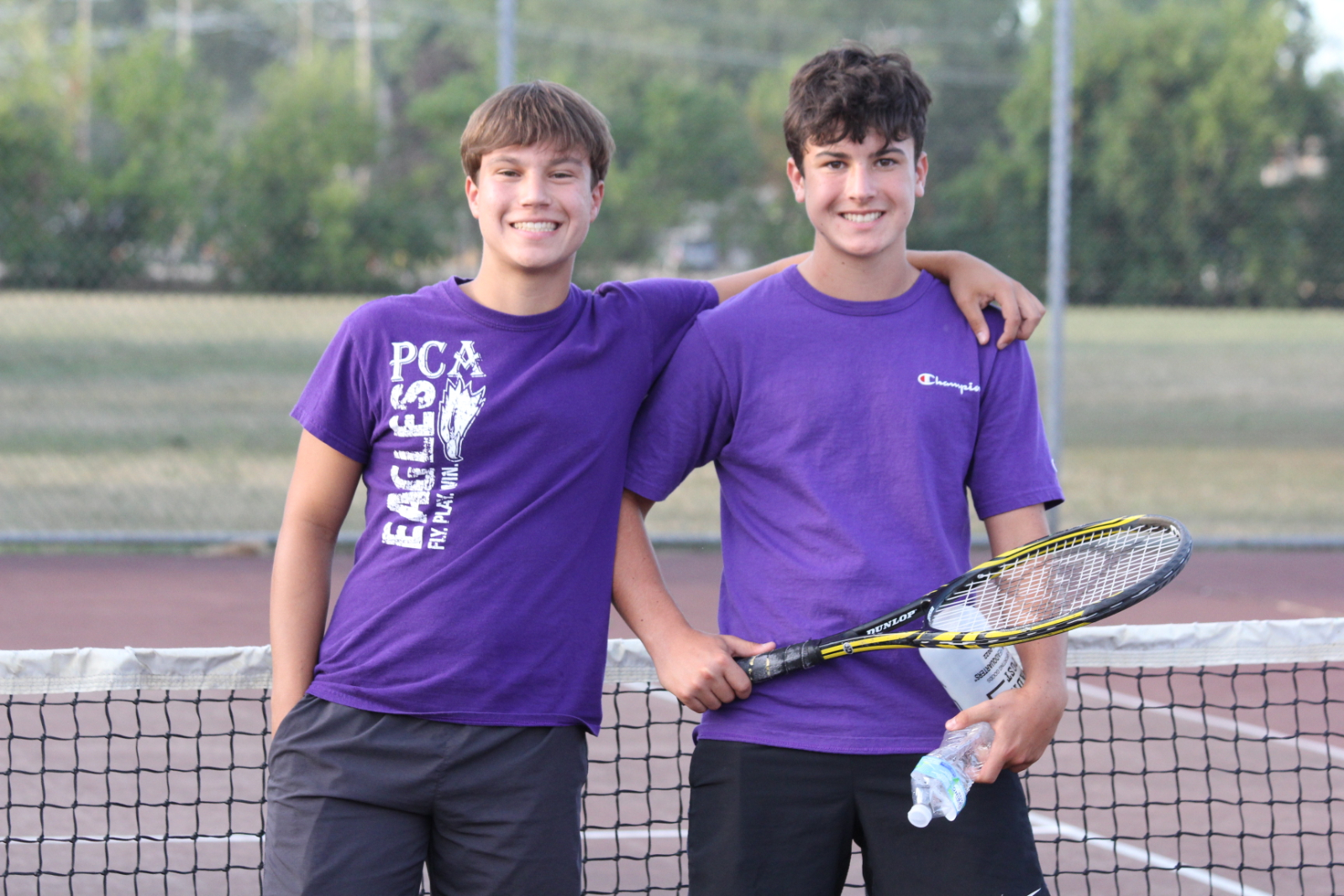 The #4 doubles spot is up for grabs with returning players Junior, Rebecca Nokku and Sophomore, Anna Brown competing with new players Senior, Emma Clark, and Sophomores Nicole Katrib and Brady Smith. All of them played well in their first matches against Southfield A and T.

Coach Manning is thrilled with his line-up, “The new players are bringing a new energy to the team. Some are high-caliber players, and some are developing. It will be exciting to see how they grow and improve over the course of the year.”

Francesca Barker is also excited, “I’m excited to be on the same team with my sister. We hit a lot this summer and we both want to help one another and help the team. We have so many new faces – so that means more years of good sportsmanship and good play.”

Isaac Demko agreed, “The new players will help the program grow. It’s really encouraging to see the turn-out. It’s great that more people are interested in the sport here at PCA.”

The Eagles are ready to improve on their stellar 6-1 dual-match record from last year. With the pandemic limiting the number of schools that are participating in athletics, there may be a lighter schedule, but PCA’s effort and excitement will remain at the top level.