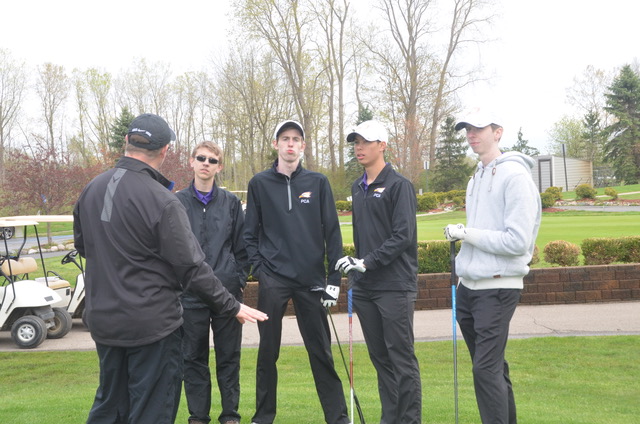 (Ypsilanti, MI) There’s the old saying, “when the going gets tough, the tough get going.” The Eagles got it going and took two more matches in hand on Tuesday, 7 May, 2019 at Hickory Golf Course, hosting Charyl Stockwell and Roeper in a conference tri-match. Eagles won both matches, 207 to 256 vs. Charyl Stockwell, and 207 to 250 vs Roeper (Roeper’s two player score was doubled as they were unable to field four scoring players.)

The Eagles settled in against the extremely wet conditions of the course and adjusted to play against vastly shortened shots that plugged into the soggy fairways and ungiving greens as balls sat where they landed. “That’s the challenge of playing in conditions that are the result of nearly two weeks of rain,” said Eagles’ Coach Al Hing. “The Pin Hunters needed to take into account the course and manage their game.”

All players had to adjust, with scores ballooning, frustrations grew and course management came to the forefront. Trying to ‘muscle’ shots back to their normal distances caused shots to veer off line into hazards, and trying to change the speed of their putting with a harder stroke made accuracy significantly harder to attain. Frustrations rose as even normal shots became difficult, with over-compensating on approach shots causing many balls to fly over greens, and long undulating putts on the first couple holes caused by judgement errors in not changing for the conditions.

Eagles scores on the first couple holes were strokes above normal and their attitude changed with adjustments. After fighting their desire to ‘muscle’ shots and finding it fruitless, they began to use their minds and adjust to take advantage of knowing their home course. Placement of shots with the conditions began to sink through thoroughly soaked and tired Strikers, and their scoring improved. Junior Rachel Costello closed on three par opportunities, and Junior Eric Moore sank a 28 foot undulating putt on the 8th hole for a par and then sank a par saving putt on the 9th hole to close out the scoring.

“As an example of winning the ‘Six-Inch Battle’ they did much better,” said Coach Hing. “Once they realized they needed to adjust and adapt to the conditions, you saw some amazing shots, some great putting, and you knew that the match was theirs to win.”

Senior Layne Pries (first), and Juniors Rachel Costello and Eric Moore (tied for second) led the charge, taking the top places of the match, and the Eagle Strikers took back their confidence and course management to equally put their scores on the books.

The team will now take a couple days to regroup and prepare for the MIAC tournament on Saturday, 11 May at WestWynd course. The tournament first T-Time begins at 11:00 AM.